The most critical part of our life is when we start our career and get married. This section explains this in details. 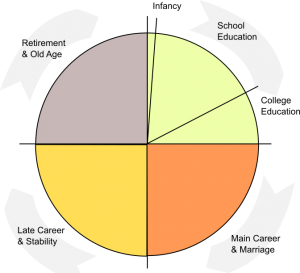 From the following diagram, you can understand how important is the ‘Early Career and Marriage’ phase and how it influences not only your own life but also your previous generation (your parents and other elderly in your house) and next generation (your children and younger siblings). 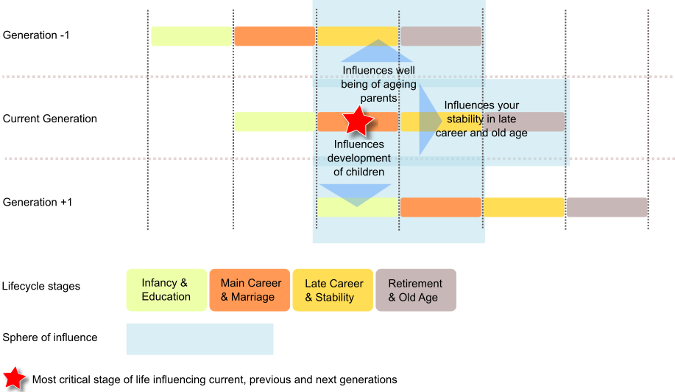 If you do not pay attention to the most critical phase of ‘Early Career and Marriage’, you are likely to face several problems related to managing the family which may include children, ageing parents and probably some ailing relatives.

Narayan lives in a small house in a remote village near Ratnagiri city in western Maharashtra. He is illiterate, works as a worker in a rice mill which is 10 kilometres away. He has 1 elder sister, 2 younger sisters and 1 younger brother. His parents are with him who are old and ailing. Elder sister is married, lives in a neighbouring village. Parents have expended all their savings for the elder sister’s marriage and have no source of new income. Narayan is the sole breadwinner in the family with the responsibility of entire family. He got married last year and his wife is expecting. Though he works 16 hours a day, he is finding it extremely difficult to make both ends meet.

Why Narayan is in this situation? His parents, during their working years, had no plan in place for anything. No plan on how much money they are earning, what kind of savings they need to do, how many children they would be able to effectively raise, what they should do take care of their health so they remain appropriately fit during old age.

Now Narayan, with inherited plight, is not able to serve parents appropriately. He has no clue on how he would take care of education and marriage of his younger siblings. And he does not know how much justice he can do to his proposed children to ensure a better future for them. Will the plight force him to send his ailing parents to an old age home? Will his children grow up to take up worker’s job in the same rice mill where he is working? Will he be spending his old age bed-ridden similar to his parents? When will this vicious circle end?

You might have come across many such Narayans in your vicinity. Or you might be experiencing a similar situation in your neighbourhood or even within your own family. It is very much possible to correct this situation so that you live a satisfactory life and your next generation is elevated to live a relatively better life…